Question :
What are various categories of software?

Software are classified into following categories –

Question :
What is the difference between an interpreter and a compiler?

Interpreter: Interpreter is a type of system software that translates and executes instructions written in a computer program lini-by-line, unit by unit etc. It is slower in execution because each time when you run the program translation is required.

Compiler: Compiler is another type of system software that translates and executes instructions written in a computer program in one go. Once compiled program need not to translate again so it works faster.

Question :
What is application software? Why it is required?

Application software is the set of programs necessary to carry out operations for a specific task. Such as for word processing there are many application software like MS-Word, Wordpad etc. These software are required to perform special task using the computer like painting, recording, typing, data handling etc.

Question :
What is system software?

The software that controls internal computer operations is called system software. It manages all the resources of a system. Its example is Operating System.

Question :
Discuss the role of utility software in the context of computer performance?

Discuss the role of utility software in the context of computer performance?

Question :
What is the importance of an OS?


What is the utility of these software?

(a) disk fragmentor: A file is fragmented when it becomes too large for your computer to store in a single location on a disk. When this happens, your computer splits the file up and stores in pieces. You can use fragmented files, but it takes your computer longer to access them.

(b) Backup software: This utility program facilitates the backing-up of disk. Back-up means duplicating the disk information so that in case of any damage or data-loss, this backed-up data may be used.


Describe the role of Operating System as a resource Manager.

1. Processor management which involves putting the tasks into order and pairing them into manageable size before they go to the CPU.

2. Memory management which coordinates data to and from RAM (random-access memory) and determines the necessity for virtual memory.

5. Application which allows standard communication between software and your computer.

6. User interface which allows you to communicate with your computer.


What are the advantages of parallel computing?

Parallel computing is a type of computation in which many calculations or the execution of processes are carried out simultaneously. Large problems can often be divided into smaller ones, which can then be solved at the same time. It refers to the simultaneous working of multiple processors to solve a computational problem. Its advantages are –

(i) It saves time and the cost too.

(ii) It makes easier to solve larger or complex problems.

(iii) It provides efficient use of underlying hardware.

(iv) It can utilize the resources available remotely.


What is process scheduling?

The process scheduling is the activity of the process manager that handles the removal of the running process from the CPU and the selection of another process on the basis of a particular strategy.

Process scheduling is an essential part of a Multiprogramming operating systems. Such operating systems allow more than one process to be loaded into the executable memory at a time and the loaded process shares the CPU using time multiplexing.


What are process scheduling queues?

The OS maintains all PCBs in Process Scheduling Queues. The OS maintains a separate queue for each of the process states and PCBs of all processes in the same execution state are placed in the same queue. When the state of a process is changed, its PCB is unlinked from its current queue and moved to its new state queue.


How does OS manage all the running processes?


What is the role of memory manager and I/O manager of OS?

Memory management is a form of resource management applied to computer memory. The essential requirement of memory management is to provide ways to dynamically allocate portions of memory to programs at their request, and free it for reuse when no longer needed. This is critical to any advanced computer system where more than a single process might be underway at any time.

Block devices − A block device is one with which the driver communicates by sending entire blocks of data. For example, Hard disks, USB cameras, Disk-On-Key etc.

Character devices − A character device is one with which the driver communicates by sending and receiving single characters (bytes, octets). For example, serial ports, parallel ports, sounds cards etc


What is parallel computing?

Parallel computing is a type of computation in which many calculations or the execution of processes are carried out simultaneously. Large problems can often be divided into smaller ones, which can then be solved at the same time. It refers to the simultaneous working of multiple processors to solve a computational problem.


How is parallel computing different from serial computing?

Parallel Computing: A type of processing in which multiple tasks are completed at a time by different processors. Note that in parallel processing there is more than one processor involved. In real time example, there are multiple queues of people standing to get railway tickets. In this case, each queue is handled by multiple people, so multiple people will get tickets at a time. Similarly, in the operating system, there are multiple queues of tasks and multiple tasks are completed by different processors at a time.


What are the advantages of parallel computing?

Parallel computing is a type of computation in which many calculations or the execution of processes are carried out simultaneously. Large problems can often be divided into smaller ones, which can then be solved at the same time. It refers to the simultaneous working of multiple processors to solve a computational problem. Its advantages are –

(i) It saves time and the cost too.

(ii) It makes easier to solve larger or complex problems.

(iii) It provides efficient use of underlying hardware.

(iv) It can utilize the resources available remotely.


What is PCB? What is its role?

Pointer – It is a stack pointer which is required to be saved when the process is switched from one state to another to retain the current position of the process.

Process state – It stores the respective state of the process.

Process number – Every process is assigned with a unique id known as process ID or PID which stores the process identifier.

Program counter – It stores the counter which contains the address of the next instruction that is to be executed for the process.

Register – These are the CPU registers which includes: accumulator, base, registers and general purpose registers.

Memory limits – This field contains the information about memory management system used by operating system. This may include the page tables, segment tables etc.


Explain booting process and its types.

When the computer is switched on, a copy of boot program is brought from ROM into the main memory. This process is called booting. The CPU first runs a jump instruction that transfers to BIOS (Basic Input output System) and it starts executing. The BIOS conducts a series of self diagnostic tests called POST (Power On Self Test). These tests include memory tests, configuring and starting video circuitry, configuring the system’s hardware and checking other devices that help to function the computer properly. Thereafter the BIOS locates a bootable drive to load the boot sector. The execution is then transferred to the Boot Strap Loader program on the boot sector which loads and executes the operating system. If the boot sector is on the hard drive then it will have a Master Boot record (MBR) which checks the partition table for active partition. If found, the MBR loads that partition’s boot sector and executes it.

Booting Process is of two types – Warm and Cold

Cold Booting: When the system starts from initial state i.e. it is switched on, we call it cold booting or Hard Booting. When the user presses the Power button, the instructions are read from the ROM to initiate the booting process.

Warm Booting: When the system restarts or when Reset button is pressed, we call it Warm Booting or Soft Booting. The system does not start from initial state and so all diagnostic tests need not be carried out in this case. There are chances of data loss and system damage as the data might not have been stored properly.


Explain any two functions of an Operating system

Two functions of an Operating system are:

Processor Management — The OS (Operating System) ensures that each process/application receives enough time from the processor to function properly. It also tries to utilize as many processor cycles as possible for the real time work.

Memory Storage and Management — The OS (Operating System) manages the sharing of internal memory among the multiple applications. It also ensures that one process should not consume the memory allocated to another process. An OS has to make efficient utilisation of different types of memory (RAM, Cache, etc.) within the system, so as to ensure proper execution of every process.


What are the advantages of GUI over CUI?

An Operating System (OS) acts as an intermediary between the user of a computer and computer hardware. The purpose of an operating system is to provide an environment in which a user can execute programs in a convenient and efficient manner.

An OS is a software program that controls the internal activities of the computer hardware and provides user interface. Application programs need to interact with the operating system for using hardware resources.

OS is the first program loaded (copied) into the computer’s main memory after the computer is switched on. Thus, one of the primary functions of operating system is to provide an interface between the user and hardware. Examples of Operating systems are Linux, Unix, Windows etc. 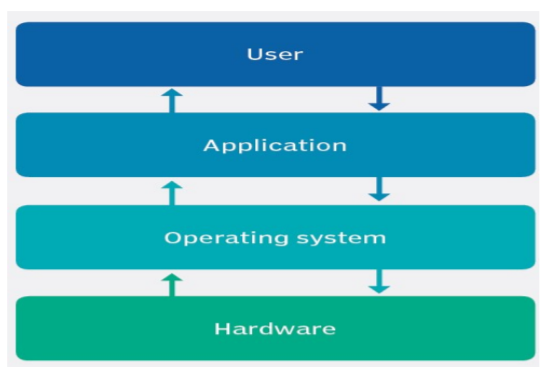 
what is Linux and what are its basic features?

Linux is one of popular version of UNIX operating System. It is open source as its source code is freely available. It is free to use. Linux was designed considering UNIX compatibility. Its functionality list is quite similar to that of UNIX. Some popular versions or distributions of Linux OS are Ubuntu, Fedora, Linux Mint, openSUSE, PCLinuxOS, Debian etc.

Kernel − Kernel is the core part of Linux. It is responsible for all major activities of this operating system. It consists of various modules and it interacts directly with the underlying hardware. Kernel provides the required abstraction to hide low level hardware details to system or application programs.

System Library − System libraries are special functions or programs using which application programs or system utilities accesses Kernel's features. These libraries implement most of the functionalities of the operating system and do not requires kernel module's code access rights.

Following are some of the important features of Linux Operating System.

Portable − Portability means software can works on different types of hardware in same way. Linux kernel and application programs supports their installation on any kind of hardware platform.

Open Source − Linux source code is freely available and it is community based development project. Multiple teams work in collaboration to enhance the capability of Linux operating system and it is continuously evolving.

Shell − Linux provides a special interpreter program which can be used to execute commands of the operating system. It can be used to do various types of operations, call application programs. etc.

The architecture of a Linux System consists of the following layers −

Utilities − Utility programs that provide the user most of the functionalities of an operating systems.